1.   General Advancement Pre-Requisites  (Ref: CAPR 60-1, 5.2.3)
Be a current CAP cadet, as shown in eServices.
Possess a CAP uniform and wear it properly.
Be able to recite the Cadet Oath from memory.
Participate actively in unit meetings.
Have spent a minimum of 8 weeks (56 days) as an Achievement 16 graduate, unless eligible for a JROTC accelerated promotion (see CAPR 60-1, 5.6.2.3).

2.   Leadership:
Write a 300-500 word essay and present a 5 to 7 minute speech to the unit on one of the topics below. A senior member will evaluate the essay and speech using these critique forms.

4.   Fitness:
Have attained the Healthy Fitness Zone (HFZ) in the Cadet Physical Fitness Test (CPFT), within the previous 180 days, under the "run plus 2 out of 3" rule.
Be mindful that the Spaatz Award's CPFT is considerably more challenging than HFZ standards. Familiarize yourself with the Spaatz requirements, set personal goals, and continue working toward Spaatz standards.

College Programs:  One semester of college ROTC, a service academy, or a military junior college (any branch) 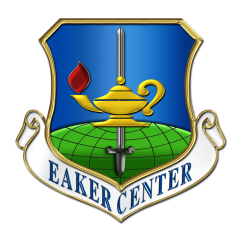 General Ira C. Eaker was one of the forefathers of an independent Air Force. With General (then major) Spaatz, in 1929 Eaker remained aloft aboard The Question Mark, a modified Atlantic-Fokker C-2A, for nearly a week, to demonstrate a newfound capability of aerial refueling. During WWII, Eaker rose to the grade of lieutenant general and commanded the Eighth Air Force, "The Mighty Eighth" force of strategic bombers. Even as a general, Eaker preferred to lead from the front, personally flying B-17 precision bombing missions over occupied France and Germany. Today, the Air Force celebrates his legacy by naming the service's top school for commanders in his honor -- the Ira C. Eaker Center for Professional Development at Air University, Maxwell AFB, Ala.