1.   General Advancement Pre-Requisites  (Ref: CAPR 60-1, 5.2.3)
Be a current CAP cadet, as shown in eServices.
Possess a CAP uniform and wear it properly.
Be able to recite the Cadet Oath from memory.
Participate actively in unit meetings.
Have spent a minimum of 8 weeks (56 days) in Achievement 2, unless eligible for a JROTC accelerated promotion (see CAPR 60-1, 5.6.2.3).

2.   Leadership:
Take Cadet Interactive Learn to Lead chapter 2 module OR pass an online test on Learn To Lead chapter 2, with a grade of 80% or higher, open-book.

4.   Fitness:
Participate in at least 1 fitness activity in the squadron.
If the Cadet Physical Fitness Test has not been attempted for 180 days or more, re-attempt it.
Consider the personal fitness goals you set during Achievement 1; evaluate your progress and continue exercising regularly.

After overhauling her first automobile engine at 13, Mary Feik turned to aircraft engines and military aircraft at 18, eventually teaching aircraft maintenance to crew chiefs and mechanics for the U.S. Army Air Force in 1942. Col. Feik is credited with becoming the first woman engineer in research and development in the Air Technical Service Command’s Engineering Division. In addition to logging more than 5,000 hours as a B-29 flight engineer, engineering observer and pilot in fighter, attack, bomber, cargo and training aircraft, she also designed high-performance and jet fighter pilot transition trainers as well as aircraft maintenance trainers. Not just noted as a pilot but also a writer, Feik authored pilot training manuals and technical engineering reports that were distributed throughout the armed forces. 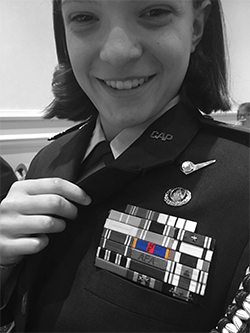 She accomplished so much but here's what she said about her proudest moment, in 2003: "My ultimate honor [is] the Civil Air Patrol cadet achievement created in my name." In her final years, she tirelessly visited cadets at wing conferences, encampments, and other special events around the nation. Col. Feik was a special inspiration to female cadets, as illustrated in this snapshot where a female cadet officer proudly displays her Feik Achievement Ribbon signed by Col. Feik.