1.   General Advancement Pre-Requisites  (Ref: CAPR 60-1, 5.2.3)
Be a current CAP cadet, as shown in eServices.
Possess a CAP uniform and wear it properly.
Be able to recite the Cadet Oath from memory.
Participate actively in unit meetings.
Have spent a minimum of 8 weeks (56 days) in Achievement 8, unless eligible for a JROTC accelerated promotion (see CAPR 60-1, 5.6.2.3).

2.   Leadership:
Pass a comprehensive exam on Learn to Lead, volume 2, with a grade of 80% or higher, closed-book, within a 1-hour time limit.

Because it is closed-book, the Mitchell Award exam is administered in the squadron. Talk with local leaders to schedule your exam.

3.   Aerospace:
Pass a comprehensive exam on Aerospace Dimensions, all modules*, with a grade of 80% or higher, closed-book, within a 1-hour time limit.

Because it is closed-book, the Mitchell Award exam is administered in the squadron. Talk with local leaders to schedule your exam.

*The cyber module’s content will be included on the Mitchell Award exam effective 1 January 2022.

6.  Special Requirement:
Have graduated from an encampment or equivalent program (see CAPR 60-1, 9.6).

Mitchell Award recipients are eligible to attend Cadet Officer School and the Civic Leadership Academy. If they choose to enlist in the Air Force, they may enter at the grade of E-3. The award is looked upon favorably by admissions staff at AFROTC and the USAF Academy. Mitchell Award recipients who become CAP senior members are eligible to enter at the grade of 2d Lt. 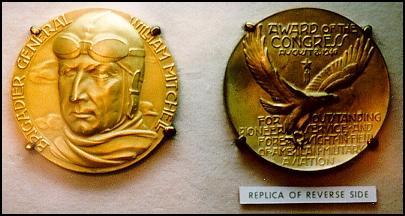 The "Father of the Independent Air Force," Billy Mitchell risked court-martial in his outspoken advocacy of military airpower. When Mitchell’s bombers sank the surplus German battleship Ostfriesland in a July 1921 demonstration, it was a strong blow for airpower. It was also a huge embarrassment for the Navy, which had said he couldn’t do it. Mitchell’s traditionalist boss, Army Chief Gen. John J. Pershing, sided with the Navy in dismissing the significance of the demonstration. Mitchell continued his all-out public campaign for airpower. He said the world stood on the threshold of an "aeronautical era" and that military airpower, independent of ground and sea forces, should be the first line of defense. World War II proved him right, and after the Allied victory, the Congress awarded him a gold medal for "outstanding pioneer service and foresight in the field of American military aviation."  With General Mitchell as their role model, cadet officers know that speaking truth to power is a moral duty.