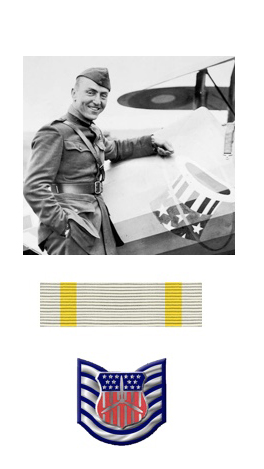 1.   General Advancement Pre-Requisites  (Ref: CAPR 60-1, 5.2.3)
Be a current CAP cadet, as shown in eServices.
Possess a CAP uniform and wear it properly.
Be able to recite the Cadet Oath from memory.
Participate actively in unit meetings.
Have spent a minimum of 8 weeks (56 days) as a C/SSgt, unless eligible for a JROTC accelerated promotion (see CAPR 60-1, 5.6.2.3).

2.   Leadership:
Pass an online test on Learn to Lead, chapter 4, with a grade of 80% or higher, open-book.
This test includes multiple-choice questions and a section testing performance in drill and ceremonies.

During his time with the 94th Aero "Hat in the Ring" Squadron in WWII, Eddie Rickenbacker earned nearly every decoration possible, including the Medal of Honor.  The first "Ace of Aces" lead his squadron in several important engagements against the German ace Baron Manfred von Ricthofen, "The Red Baron." In his later life, he served as president of Eastern Airlines.