The Air Sortie List page will list all air sorties (Definitions: sortie - specific operation involving a single resource on a mission; air sortie – a sortie involving an aircraft) currently entered for the mission selected. The easiest way for you to access the air sortie list page is from the Current Missions List page (that’s the WMIRS page that loads by default when you first enter WMIRS). From the current missions list, click on the number in the air sortie list associated with the mission you are seeking to access. Let’s review the columns of the air sortie page.

Note: Each column header may be clicked to sort the list by that columns content (i.e. day, type, tail no., pilot, etc.).

Actions – The first column is not labeled; however, it contains three links for each sortie entered: Edit, Brief, and Debrief. The specific functions of each of these will be reviewed later in this guide when reviewing the sortie process.

Sortie – This column lists the sortie numbers of each sortie. Note: air sorties will begin with an “A” followed by four digits including leading zeros (i.e. A0034).

Sortie Day – The date the sortie is scheduled to be conducted on.

Sortie Type – For missions with multiple types of sorties the type of sortie that was selected will be indicated. For example, on the Cadet Orientation Flight mission sortie type is either ORIDE or RELO (ORIDE – orientation flight, RELO – relocation flight).

Tail No. – The N-number (tail number) for the aircraft that was selected to be used on the sortie. Sorties may be created without a tail number selected. This is common where sorties may be built by mission base staff and an aircraft has not been assigned yet.

Call Sign – Each CAP aircraft has a designated CAP callsign. (Callsigns are discussed in more detail in 3.2.). The callsign associated with each tail number is auto populated when the tail number selection is made.

Pilot – The pilot listed as pilot in command (PIC) for the flight will be shown.

Tracking No – The tracking number field may be used on certain missions. This field is not automatically filled and if used will be specified by the mission base staff or appropriate wing staff member providing mission oversight.

Destination – The ICAO identifier for the airport of intended landing (i.e. KMQJ, KUMP, etc.). Note: this is the destination where the sortie will terminate. For flights where intermediate landings (touch and go, full stop taxi back, etc.) will occur but the engine will remain running with no crew change, intermediate airports should be included in the route section of the sortie page. The destination field is where the engine will be shut down and that sortie terminates.

Est Departure – The time the sortie is proposed to depart. The departure time for planning should be the estimated engine start time. Be sure to enter time in Zulu unless you’ve configured WMIRS to display your local time zone. (A time zone reference is noted near the time selection when entering the time.)

Hours – Reflects the duration of the flight. Prior to the flight being completed this time is based on estimated departure and arrival times; after actual times are entered this column will reflect the actual time flown.

Additional Functions – Above the air sortie list/table are a few functions that will help you. These miscellaneous functions and data will be reviewed here. 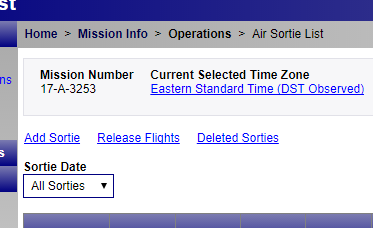 Mission Number – Shows the mission number sorties are currently being viewed from.

Current Selected Time Zone – Shows the time zone times are being displayed in (user specific and may be changed).

Deleted Sorties – Displays sorties that have been deleted. Deleted sorties are not canceled sorties; this will be reviewed in more detail later.

Sortie Date – Drop down with several options. Each date that has a sortie entered will be available for selection allowing the user to view all sorties for that date excluding canceled sorties. Additionally, an “All Sorties” option is available which will list all air sorties for the selected mission including cancelled sorties. Note: if you can’t find the sortie you are searching for try checking the sortie date drop down and using all sorties to see if the sortie you are searching for was entered on the wrong date.