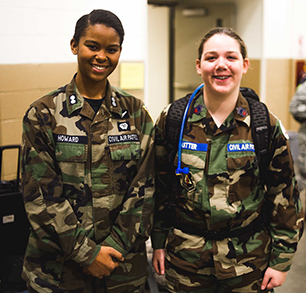 A Need for Guidance. Adolescent wisdom will take a cadet only so far. For cadets to develop their leadership skills, they need help from mentors who can provide them with feedback that is positive, constructive, and specific.

Performance Goals. The “Leadership Expectations” shown on the Cadet Super Chart and the CAPF 60-90 series forms, Cadet Leadership Feedback, are tools toward that end because they outline in broad strokes what leadership skills we want cadets to develop during each of the four phases in the Cadet Program.

Progressive Nature. Because a cadet’s maturity and leadership capabilities should increase as he or she advances in the Cadet Program, CAP’s leadership expectations are progressive, too. For example, in the arena of communication skills, we should be pleased with Phase I cadets if they simply listen well and ask good questions, while Phase IV cadets should be on their way toward becoming succinct and persuasive communicators.

Frequency. At least once per phase, unit commanders must ensure each cadet receives feedback about their leadership performance, using the CAP Form 60-90 series form. We’ve designed this form to facilitate a discussion about the cadet’s strengths and the areas they need to improve upon. Consider it a tool for mentoring cadets and helping them grow as leaders.

Do cadets have to meet each and every one of the leadership expectations to earn a promotion?
No. The “Leadership Expectations” listed on the Cadet Super Chart outline in broad strokes what level of leadership skill cadets should be displaying during each phase of the Cadet Program. Commanders should use it as a guideline when making promotion decisions and mentoring cadets, but it is not intended as a definitive, absolute list of required skills.

Why are some sections of the “Leadership Expectations” blank on the Cadet Super Chart?
Phase I cadets are just beginning to learn how to lead, so, for example, it would be inappropriate to evaluate their delegation skills. Therefore, some sections of the chart have been left blank.

What does the squadron do with completed CAPF 60-90 series forms?
In the best case scenario, each cadet would receive a copy of their completed form and a copy would be placed in their personnel file, but ultimately units are free to decide what works best for them.

Why does the CAPF 60-90 series form suggest that cadets formally report to their evaluator?
Having the cadet formally report signals that CAP takes leadership feedback seriously and that the cadet should, too.

Why does the CAPF 60-90 series form suggest cadets be put at ease during the feedback meeting?
When meeting with cadets to offer feedback, we want them to relax so they can listen carefully to their evaluator / mentor.  Putting cadets at ease also encourages them to ask questions and offer comments. Still, the atmosphere should be marked by professionalism and not become too casual.

Why should the cadet be told right away if they will be promoted or retained in grade?
If using the CAFP 60-90 series form in conjunction with a promotion board, the cadet’s biggest concern will be, "Am I getting promoted or not?" Eliminating that distraction at the outset allows the cadet to focus on the officer’s feedback.

But how can I tell if a cadet is ready for promotion before I conduct a feedback meeting or promotion board?
Simply by completing a CAPF 60-90 series form, you’ll be thinking about the cadet’s leadership performance, which should be enough to help you decide if the cadet is ready for more responsibility or needs more time to grow. A feedback session should be just that – a time to share insights and help a cadet consider how they’re doing as a leader. It’s not meant as an oral exam, performance test, or an added requirement for promotion.

Why ask the cadet what they’re doing well and not doing well?
This encourages cadets to develop a habit of thinking critically about their performance as a leader.

Why should the evaluator offer only 2 or 3 comments about what the cadet needs to improve upon?
There are only so many things any of us can work on at one time. Offering too many suggestions is counter-productive because it overwhelms the cadet.