COVID-19 Safety Precautions- Spaatz testing may take place in any phase of COVID-19 Remobilization if allowed by local officials and with the permission of the wing commander. Everyone involved in a Spaatz attempt should wear a mask and maintain 6’ social distancing throughout their time together, and only low-risk individuals should participate. The cadet may remove their mask for the fitness portion of the exam. A family member may hold the cadet’s feet for the sit ups, or they may be anchored under an object.

Be a current CAP cadet, as shown in eServices
Possess a CAP uniform and wear it properly
Be capable of reciting the Cadet Oath from memory
Have earned the Eaker Award
Have completed Cadet Protection Basic Course, if over age 18
Obtain permission from your squadron and wing commanders to take the exam. Draft an email to your squadron commander and include following information:

Name
CAPID
Exam Attempt  (1, 2, or 3)
Ever served on active duty?  (Y/N)
Propose a primary and alternate date, time, and location for attempting the exam

Ask your unit commander to endorse this email and forward it to the wing commander for approval, with a copy to the Wing/CP.

COMPONENTS OF THE SPAATZ AWARD EXAM

A helpful diagram explains the exam process. You'll need to request permission from your unit commander and wing commander (copy to your wing director of cadet programs) to attempt the exam. Please use the Spaatz Award Exam Request Form CAPF 60-87. As a practical matter, do not expect to attempt the exam for at least 2 weeks after you make your request. Even if the wing commander approves your request, he or she will need time to appoint a proctor and then the proctor will need time to coordinate with you regarding the date, time, and location of the exam.

Carl “Tooey” Spaatz was the first to serve as Chief of Staff of the United States Air Force. One of the giants in the history of airpower, in 1929 Spaatz, together with a crew that included Ira C. Eaker, set an important flight endurance record of 150 hours and 40 minutes in the early days of aviation. During World War II, he commanded the Allied air campaign against the Nazis. In the Pacific Theater, the atomic bombing of Hiroshima and Nagasaki took place under his command. After retiring from the Air Force, General Spaatz served as the first chairman of the Civil Air Patrol National Board. 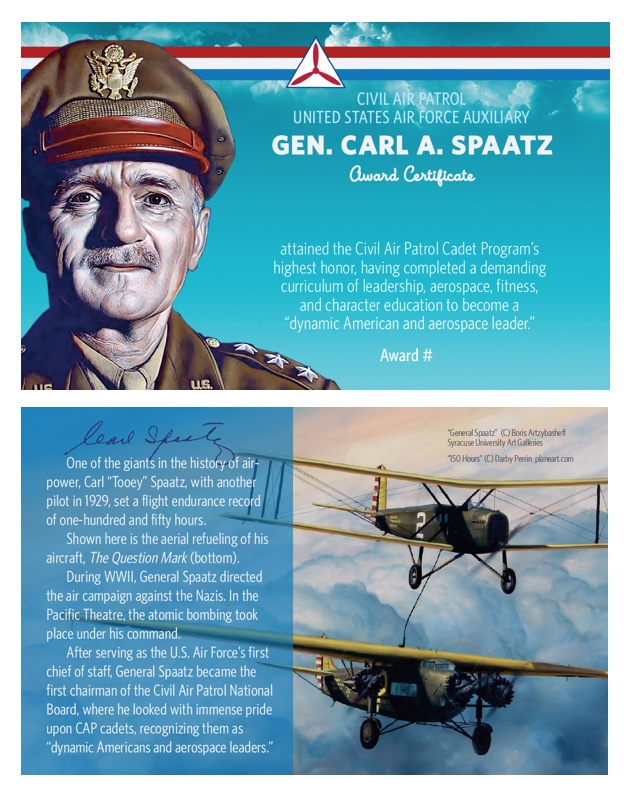 New Spaatzen receive a Spaatz Award wallet card, personalized with their name and Spaatz number, from NHQ within 120 days of earning the award. (Link: Larger Image)

On the front is a detail of Boris Artzybasheff's illustration, which appeared on the cover of Time magazine on 12 June 1944 above the headline, "General Spaatz, World's No. 1 Bomber." On the reverse is detail from Darby Perrin's painting, "150 Hours," commemorating Spaatz's aerial refueling of The Question Mark.

Spaatzen may purchase cards from The Spaatz Association. Cards are not available to non-Spaatzen collectors.