Tips From the Field - Participation Flexibility

Tips From the Field:
Allowing Greater Flexibility When Outside Activities Conflict with Civil Air Patrol 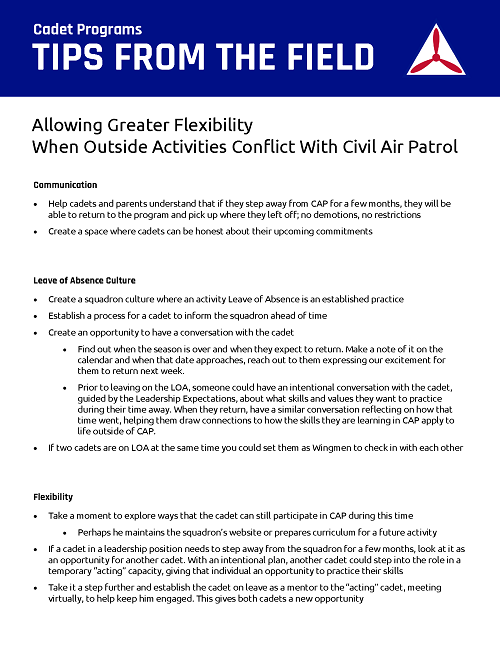 Well-rounded cadets often participate in lots of extra-curricular activities. Perhaps they play on the basketball team, or they’re an actor in their school play. They may be captain of the debate team or a member of Model UN. There often comes a time of year when that club or activity may require them to be away from CAP more than they are present. How do we approach this and find a balance in supporting the cadet in their outside activities, while still keeping them connected with Civil Air Patrol?

In a recent meeting with the wing DCPs, the question this question was posed. The following article is a result of that discussion, packed with tips and ideas from the field to help keep your cadets connected, allow for flexibility while still keeping in alignment with the regulations.

Extra-curricular activities often give cadets an outlet to practice the values and skills taught in CAP. The editor of the school yearbook is utilizing her leadership skills, the running back on the football team is furthering his physical fitness, the member of the debate team is engaging with character development. Perhaps we shouldn’t look at the activities as competition, but rather as something that can happen in tandem.

Creating a squadron culture where an activity Leave of Absence is an established practice is an important piece of keeping cadets connected with the program. Help cadets and parents understand that if they step away from CAP for a few months, they will be able to return to the program and pick up where they left off; no demotions, no restrictions. Creating a space where cadets can be honest about their upcoming commitments will help in a variety of ways.

Its so much better to know that Cadet Jones will be gone for the course of baseball season, rather then wondering where he has been the last few weeks. Establishing a process for a cadet to inform the squadron ahead of time creates an opportunity to have a conversation with the cadet. We can find out when the season is over and when they expect to return. We can make a note of it on the calendar and when that date approaches, reach out to them expressing our excitement for them to return next week.

Prior to leaving on the Leave of Absence, someone could have an intentional conversation with the cadet, guided by the Leadership Expectations for their specific Phase, about what skills and values they want to practice during their time away. When they return, have a similar conversation reflecting on how that time went, what successes they had and where there is room for growth. Help them draw connections to how the skills they are learning in CAP apply to life outside of CAP.

We also could take a moment to explore ways that Cadet Jones can still participate in CAP during this time. Perhaps he maintains the squadron’s website or prepares curriculum for a future activity. Obviously, you would need to assess this on a case-by-case basis and work with the cadet’s skills and aspirations, but likely there is a way to keep a cadet involved when regular attendance isn’t possible.

It can be challenging when a cadet in a leadership position needs to step away from the squadron for a few months. However, we could look at it as an opportunity for another cadet. With an intentional plan, another cadet could step into the role in a temporary “acting” capacity, giving that individual an opportunity to practice their skills. We could even take it a step further and establish the cadet on leave as a mentor to the “acting” cadet, meeting virtually, to help keep him engaged. This gives both cadets a new opportunity.

When a cadet is away from the squadron for a while, its valuable to keep them connected by celebrating their accomplishments outside of CAP. In fact, this is beneficial for all cadets. If a cadet earns their Eagle Scout or makes the winning touchdown at the last football game share that on your squadron’s Facebook page. It’s not specifically a CAP accomplishment, but they are part of the squadron, and making a small effort to celebrate them goes a long way to building relationships and strengthening a sense of community that keep kids (and adults) involved. If we show they that they are important to us, CAP will remain important to them.

When we speak about this topic the phrase “active participation” often surfaces. But what do we mean when we say active participation? This phrase is mentioned several times in the 60-1, but only in relation to promotions. If a cadet isn’t attending regularly, they won’t meet the promotion requirements during this time, and that’s ok. If a cadet needs to step out for a few months, it’s expected that they won’t promote during that time. It’s important to note that the CAPR 60-1 does leave this open for commanders to take into consideration the specific circumstances surrounding the cadets’ participation. Since the regulation intentionally uses the language “should” there is room for flexibility.

3.4.1.1. Attendance & Promotion Eligibility. Active participation is a promotion requirement because direct, in-person involvement in the Cadet Program is the most effective way for cadets to learn and grow as leaders. “Active participation” is not precisely defined because the reason for, frequency of, and duration of absences varies greatly. Commanders should consider cadets “active” if they participated in four meetings or activities during the previous eight weeks.

While active participation is required for promotion, it’s not a baseline requirement for most other things. If Cadet Smith has missed several meetings recently due to play rehearsal, but is available for Saturday’s day hike, why shouldn’t she attend the activity? She is a cadet in good standing, she attended regularly prior to the play starting, and there is plenty of space for her. While there are some activities that have limited spaces and therefore require decisions to be made, it is encouraged to include all cadets in good standing whenever possible.

Providing the opportunity for flexibility is crucial to maintain a high level of cadet engagement and retention. Cadets sometimes will need to prioritize another activity over CAP, and that’s ok, but we want to instill a desire in them that will draw them back to CAP once that commitment is fulfilled. Maintaining open communication, finding ways to be flexible, making space for them to serve in creative ways, celebrating their accomplishments and trying our best to work with each cadet’s situation will keep cadets coming back.

What are some of the ways that you have kept cadets engaged while they were temporarily unable to attend unit meetings? Share your thoughts in the comments.

Comments
There are no comments yet.