Cadet Programs would like to welcome Lt Col Heather Weaver to the National Cadet Team as the new DCP Development Coordinator. 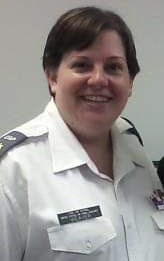 About Lt Col Weaver
Lt Col Heather Weaver has been a member of the Civil Air Patrol since October 1991. As a cadet she held the positions of Squadron Cadet Commander, Encampment Cadet Commander, and earned the Mitchell, Earhart, and Eaker (#6) Awards. As a senior member she has served as a Squadron Commander of two Squadrons, Group Commander, Wing Director of Cadet Programs, Encampment Commander, RCLS Director, and DCS for Cadet Programs at the Region level.  She has staffed numerous PA Wing Encampments, PA Wing Cadet Training Schools, NER CLS, and Hawk Mountain Ranger Schools in her 31 years of membership. She currently serves as the Assistant DCS for Cadet Programs for Northeast Region.  She completed CAP Level V and earned the Gill Rob Wilson Award (#3981) and holds a Master Rating in Cadet Programs. Outside of CAP, Lt Col Weaver is a university administrator and faculty member specializing in new student programs, first year seminar, and student engagement.

About the Position
The DCP Development Coordinator position is a new position created to support those in the role of DCP and DCS-CP. As someone with an extensive working knowledge in both the current Cadet Program and the specific needs of those in the DCP role, we hope this position will provide a much-needed resource.

When you are appointed as a new DCP, you can expect a call from Heather to welcome you to the team and help you get started in your new position, connecting you with important resources and answering any questions you might have. As a seasoned DCP, we hope you will reach out to Heather as you encounter new challenges. We hope having someone in this role will facilitate a better community and better connections amongst those serving as a DCP or DCS-CP.

Please join us in welcoming Lt Col Weaver to the National Cadet Team!

Comments
There are no comments yet.